… So I see today that the House of Representatives passed a bill yesterday that would bar federal courts from striking the words “under God” from the Pledge of Allegiance. This seems pretty weird to me, as the point of the legislative branch of the government is NOT to tell the judicial branch what they can (or can’t, in this case) do. What happened to the separation of powers in the government we all learned about in fifth grade?

It’s sad to watch as this separation of power is being eroded a bit at a time– with minor things like this to major things like suspension of trials and due process in certain situations. While I typically gripe about how the executive branch is overstepping its bounds, it’s clear the legislative branch is following.

“I love the pledge. But this bill … violates the spirit of pledge by professing a lack of faith in the constitutional framework.”

In a way, one wonders if this sort of thing is really just a thinly-veiled attempt to win votes. That’s the worst kind of lawmaking, if you ask me, because it’s so painfully short-sighted. 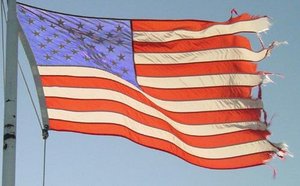