Part of the magic and mystique of science– and the reason I have such a passion for it– is the fact that now and again, you have an opportunity to see something never before seen… and sometimes that thing is beautiful beyond words.

Astrophysics is particularly good at this; perusing images taken by the Hubble Space Telescope is a journey down a road of splendor and pictures so amazing, so grand, so awe-inspiring that it can humble you to realize there are such things… and we are but a tiny insignificant part of such a grand cosmos.

Today the Cassini-Huygens mission released some pictures of a Mimas fly-by. This is a small moon of Saturn (and, incidentally, the subject of the very first computer program I ever wrote) and an enigma of sorts because it survived an impact that should’ve splintered it. Although the picture here doesn’t show Mimas very well (it’s on the right side), it does show an amazing display of Saturn’s rings. The planet– or rather the clouds– are in the lower left, with rings at the bottom and top. 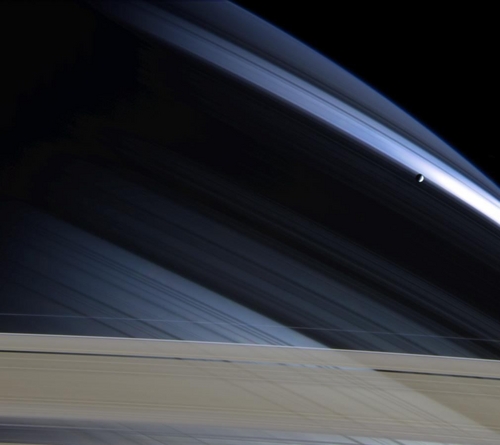