I’m back from my jaunt to California, where Lily and I had a great time planning everything for The Fourth Company (name yet to be determined). Some highlights:

On my flight out of Denver, I sat next to a woman who had a big Vitamin Cottage bag, paisley pants, a hookah filled with dry herbs, and a book titled “Analyze Your Dreams”. After takeoff, she sat in the lotus position for the bulk of the flight. Yep, definitely from Boulder!

Friday night we spent a couple of hours hashing out ideas for names, and came up with some pretty hilarious ones. No, we weren’t drunk, but a casual observer at the bar and grill we were at might have thought so. Several times, as we thought of a goofy name (and its associated tag line), I was laughing so hard I was crying.

On Saturday we decided to hang out at the public library, since we basically needed a place to sit for eight hours and lay out plans for the business. We scored big, because that was the day the library was having its annual book sale. Making the executive decision to abandon work temporarily, we loaded up on books (two bucks for a grocery bag full). Now I’ve got about forty new books for a total of four bucks. Sweet.

We were told by our friend Christine that we must be hanging out together too much, because both of us use the word “awesome” a lot. Apparently it went out of vogue in 1984 or so, although I didn’t get that memo and will continue to use it liberally. Also, Lily observed that she finds herself saying “no worries” quite a bit, which she most definitely picked up from me.

All in all, it was a good time (though tiring!) and we made a lot of progress. Soon we’ll launch The Fourth Company and get on the road to fame and riches. 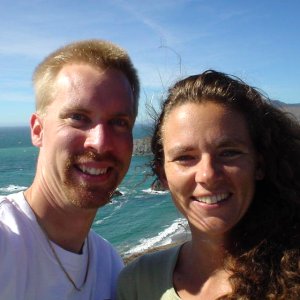