Since I had a spare LCD screen (it had been Craig’s, but now he’s working from his house instead of mine) I thought it would be super geeky– but also cool– to buy a second video card for my main development computer and set up a dual-head configuration.

The video card was a cheap $30 deal, and after a bit of twiddling I was able to get both screens working nicely. As it turns out, having that much real estate is a boon to productivity. I’m amazed at the usefulness of a setup like this… I really feel like I can do more because I can scatter windows all over the place while I’m working. Keep in mind that I also have ten different “desktops” I use within my windowing system, switching between them on a minute-by-minute basis as I hammer out software and databases. 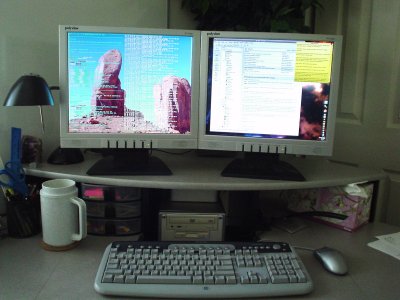