The world has been on the edge of its collective chair recently, waiting for China to unveil the new mascot for the 2008 Olympic Games. Well, the day has come and we have not one, but five mascots! Their names are:

Apparently if you say them in order like that, you’ll be saying “Beijing welcomes you!” in Chinese. You’ll also sound like you have a horrible stammering problem, and that it may be time for your medication.

From an AP article:

A plethora of real and mythic creatures were among the candidates considered by Chinese leaders, Olympic officials and design specialists over the past year. Among those that didn’t make the cut were the dragon and a mischievous magical monkey out of Chinese folklore.

Personally, I think a mischievous magical monkey would be awesome. Imagine Curious George as the Olympic mascot! The mind boggles just thinking about the possibilities there.

Best of all, perhaps, is the photo below showing Jackie Chan (the little man in an aluminum-foil coat) dancing with the new mascots. Oh. My. 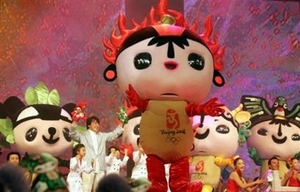