I’d like to stand up and cheer for people like Deborah Davis, a fifty-year-old mother of four who was recently arrested on a Denver public bus for refusing to show identification to a police officer. She was simply riding the bus, talking on the phone to a friend, when the officer stepped onto the bus and asked everyone aboard to present photo identification.

Knowing her rights, Ms. Davis refused. A second officer was summoned– he, too, asked to see her identification. She refused again. A federal officer was called to the scene, with the same result. She was promptly put into handcuffs, removed from the bus, and taken to the police station. There, after a bit of creative thought, the police charged her with refusing to comply with official instructions (a federal misdemeanor). She was told if she ever rides that bus again she will be arrested and put in jail.

The case is scheduled for federal court in two weeks. It should be interesting to see what happens. Technically, she has committed no crime– there was no sign stating that all bus passengers must provide identification, and there is no law stating that United States citizens must do so at the request of any law enforcement officer. In fact, demanding to see someone’s identification when no crime has been committed and no warrant issued is an illegal search. There are clear Constitutional issues here, making me wonder whether it will go to the Supreme Court eventually.

As our society becomes more indoctrinated to the official War on Terror stance that “security means freedom”, we grow increasingly complacent. We hand over our driver’s licenses without a second thought, simply because someone wearing a uniform asked for it. This is a dangerous path– one which probably has Washington, Franklin, and Jefferson turning in their graves. Hopefully more people like Ms. Davis will continue the struggle to free us from our own government. 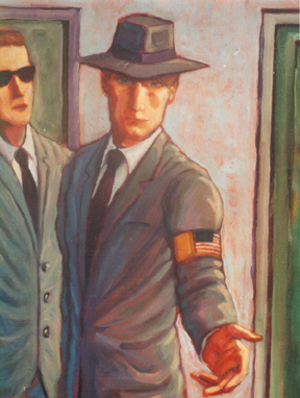