A little over two years ago I wrote about the “felonification” of America– how minor crimes are increasingly being classified as felonies, generally at the whim of the corporations who want to protect their profits.

As we continue down this slippery slope, another splendid example of this trend has appeared. It would be comical if it weren’t so tragic.

In Canton, Ohio, a high-school senior had an idea for a little prank, and wrote it in his online blog: he suggested a bunch of friends all go to their high school web page and repeatedly refresh the page. This would, in theory, cause the web server to begin choking on requests– and thus become slower.

So they did it. And sure enough, the web site was slow. Ha, great joke!

But it didn’t end there. City prosecutors, aided by the school district, are charging the teen with a felony because he affected a public computer system. The city prosecutor said:

Michael said it was a joke. We showed him how we deal with this kind of joke.

Wow. Here’s a guy who has no grasp of reality, much less high school pranks. It’s hard to tell whether he’s trying to make a name for himself as “tough on crime”, or whether he’s really that unbelievably dense.

What’s more, there was a separate incident last year where several students broke into the school’s computer system (yes, the same school) and changed some grades. They were caught and charged with a misdemeanor. That’s right– a misdemeanor. But it’s a felony to simply look at a web page many times. What gives?

In a rousing analysis of the incident on Slashdot, there was a very insightful comment that perfectly echoes my sentiments of two years ago. I’ll quote it here:

There was a time when we made an important distinction between types of crimes. Misdemeanors were “minor crimes” annoyances that can be cleared up easily enough and are a) not worth making permanent and b) best forgotten once the problems is solved. A classic example is littering, or spraypainting something on a park bench. The former is solved by making the litterbug pick up their garbage (and maybe some other peoples’) and the latter by having the offender repaint the bench brown. In both cases the offense can be “fixed” and the individual can learn form a simple dressing down. In most jurisdictions misdemeanors are not even recorded (or didn’t used to be) and never ever became part of someone’s permanent criminal record (especially a minor). Moreover misdemeanors aren’t liable for jail time above and beyond “time served” (in the drunk tank).

Felonies are major or “permanent” crimes such as theft, maim, and murder. They connotate crimes that cannot be simply “cleaned up”, crimes that cannot be undone in any meaningful sense and crimes that may signal permanent problems for the individual in question. Felonies attach much stiffer penalties (for both juveniles and adults) as well as “permanence”. In some states felons lose the right to vote permanently. This is politely known as “Civil Disenfranchisement”. In Midevil times it was associated with the term “Civil Death”. Felons are also forbidden from obtaining some jobs (in government), and have to tell all other employers of their status. They are also often forbidden from obtaining some scholarships and grants. While not all of these attach automatically to juvenile felons many of them do. Increasing numbers of states are making no distinction between juvenile felonies and adult felonies. Unlike misdemeanor crimes felons are truly marked for life.

The basic upshot of this is that this kid could be harmed for life for what is, in essence, a nothing crime. He encouraged people to visit a website and thereby caused a server to run slow, not stop, not crash, not burst into flames, just run slow. This is a temporary problem, a fixable problem, and one that doesn’t even require two coats of paint.

This is a dangerous, vicious overreaction on the part of the city prosecutor, and the school officials. They are abusing their power and risk punishing a kid for life for something that should be handled by a stern talking to and no dessert.

Hear, hear. I hope this case goes up in flames, the prosecutor gets a stern beating with the cluebat, and people begin to wake up and realize that our justice system is slowly but undeniably being made to serve the corporations and those who would take away our freedoms in exchange for temporary safety. And we all know how Benjamin Franklin felt about them. 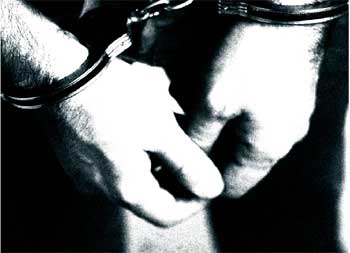