For reasons Laralee and I still don’t really understand, the public schools in this area don’t teach multiplication tables to the kids. Instead of having the students memorize multiplication tables from one to ten– like I remember doing in Mrs. Schroer’s third grade class– they encourage “grouping”. That means when you’re multiplying, say, four by eight, you draw four groups of eight objects on the paper and count the total. It’s great if you’re just starting to learn the concept of multiplication, but it doesn’t make much sense if you understand how it works and just want to get 32 without drawing and counting.

So, being the conscientious parents we are, we decided that if Alex and Kyra can memorize their tables (up to ten times ten, which is really all they need) we’ll give them a reward. We’ve been working on it during the summer, but admittedly we haven’t been very consistent about it. Thus, school will start in a few days and we feel like we need to finish this little project.

Thinking it would help if they had a way to test themselves, I looked around the web for some fun multiplication programs. To my surprise, there really aren’t any that are (1) simple, and (2) free. Schools buy software, sure, but it’s fairly complicated and of course costs money. I guess I expected to find all kinds of funny kids’ math programs for the taking, but it’s just not so.

I just sat down for an hour and whipped out a terribly simple (and somewhat boring) little web application that picks twenty random multiplication questions, prompts for an answer, and shows a little history of their work. It’s nothing magical or special, but hopefully it’ll give them the practice they need. 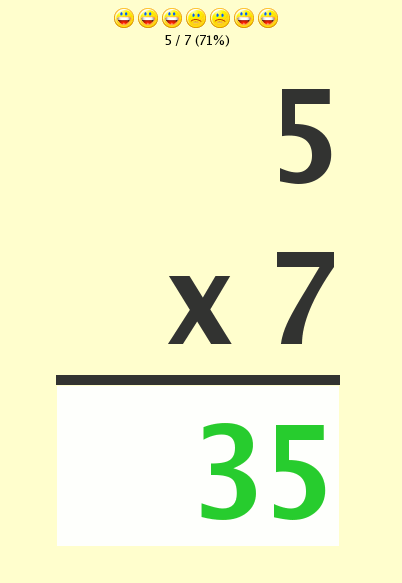