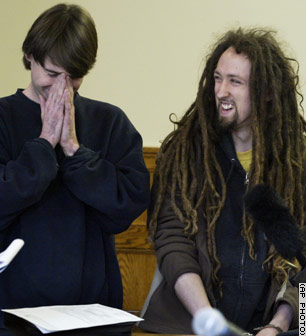 These are the guys (pictured here at their court hearing today) who placed a dozen LED lightboards on some bridges and buildings in Boston and threw the fire department into a frenzy because someone thought they were bombs. The attorney general of Massachusetts, Martha Coakley, had some harsh words:

It had a very sinister appearance. It had a battery behind it, and wires.

Whoa. A battery? And– gasp– wires?

What really happened here was someone got a little more panicked than they should have, and now the city of Boston looks like a bunch of buffoons. Instead of laughing it off, they’re throwing the book at these two guys and saying they planted a “hoax bomb device” (which is a felony, apparently). In fact, they were light-up ads for a cable TV show. Admittedly, these two could be charged with littering or something, but because Boston shut down some major thoroughfares and caused huge traffic problems, the city must feel like they need to frame this as a horrible terrorist attack.

Note that similar ads have been sitting in New York, Los Angeles, Chicago, Atlanta, Seattle, Portland, Austin, San Francisco, and Philadelphia for two or three weeks. No bomb scare. No mobilization of federal anti-terrorist forces– including the U.S. Northern Command in Colorado (wow, a couple of signs scrambled the highest levels of the military?).

Probably the best part of the story (so far) is where Peter and Sean held a press conference and refused to answer any questions unless they were about hair.