When I was up visiting Tom we were talking about the book Into Thin Air, where the author talks about the point where he was just about to die, and lamented the fact that he had a song stuck in his head and realized that he didn’t want to die to that song. It turns out the song was by the band Boney M, and Tom had cranked it in his car as we drove through the mountain passes of Washington.

The song, with the mysterious title “Brown Girl in the Ring”, includes such spellbinding lyrics as

Old head water run dry,
No way to wash my clothes.
I remember once at the midnight
We had fried fish and Johnny cakes.

But heck, I can’t make out the words that closely, so maybe I’m hearing them wrong. In any case, despite the horrible lyrics, it’s actually a very catchy song and sure enough, that refrain (“tra la la la la”) really gets stuck in your head. 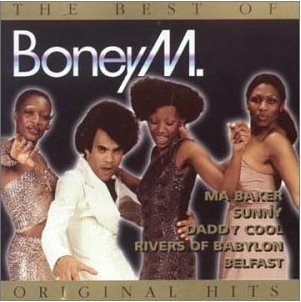