Today was the summer ultimate league tournament. The sky was a gorgeous blue, the temperature was a nice 80ish, and there was only a light breeze. Beautiful weather for a day on the grass.

We were pretty much in the middle of the pack in the regular-season standings, so we were seeded against a team with a slightly better record. After a rough start we found ourselves down 5-9 but rallied for four straight points to tie it at 9-9 going into the final point. That last point went back and forth for a while, with everyone playing hard. All of us on the field were exhausted (and it was barely 11am!) and those on the sidelines were cheering and shouting… it was crazy. But the other guys scored the winning goal on a great diving catch by one of their women, so they advanced to the next round of the championship.

We, on the other hand, had the distinct privilege of playing in the consolation (“beer”) bracket, where we met up with a team who had a bunch of fun players. We put together a strong defensive showing, stopping them again and again as we continued to score, and found ourselves with a comfortable 8-1 lead. At that point we decided we should just have some fun, so we pulled out a secret somersault play:

A few points later we played an upside-down point, where everyone had to throw the disc upside down (hammer, scoober, dish, or just a straight upside-down pass). That was a blast, and we finally pulled it off after an (if I may be so modest) amazing fingernail catch by me: 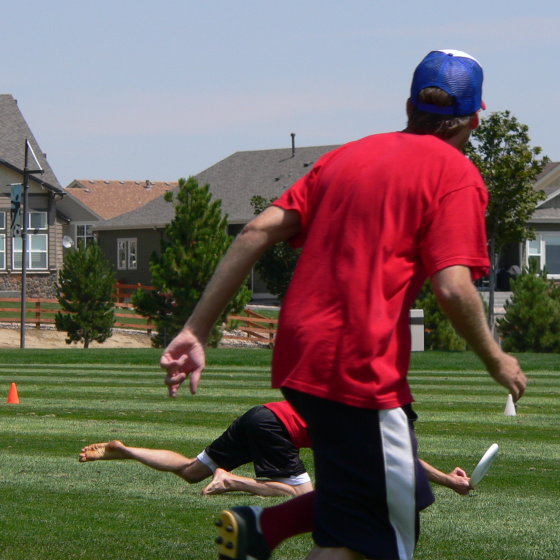 (That’s me in the background– Josh is coming up the sideline and completely blocking the camera!)

So we beat them to advance to the beer bracket championship game– truly the pinnacle of any ultimate team’s season. Unfortunately the opposing team had all but disintegrated; several of their players had been injured in prior weeks or just couldn’t make it today, so they didn’t have enough to field a full team. The team we’d just beat asked if they could play, so a few of their players joined, and a third team jumped in as well. So we essentially played against three other teams at once.

Again we got off to a rough start and found ourselves down 3-7, but a rally tied the game at 7’s. They scored again to take the 8-7 lead, and then for reasons I still don’t understand about half of them decided to leave. As in, leave the field and go home. It was completely weird, but it meant we no longer had an opponent! The game was supposed to go to 15 but we had to stop. So in my heart I count it as a win by forfeit (although surely we would’ve won anyway– we were playing a strong game).

So there you have it: the beer bracket champions of the Boulder summer ultimate league. 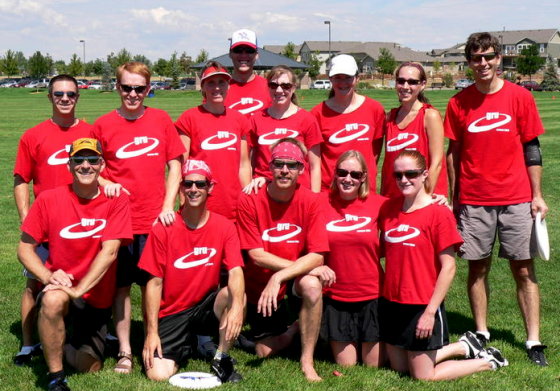 It was a great season and a lot of fun. What a fantastic group of friends.