Yesterday we had a little adventure with a mouse. I was down in my basement office clacking away at the computer and noticed something on the screen of the window beside my desk. I thought it was a bird, but upon closer inspection it turned out to be a mouse. The little guy was about the size of a half-dollar, and he had somehow fallen into the window well and was apparently trying to figure out a way back up to solid ground.

Of course the screen wouldn’t get him there, nor was there really any way for him to climb the window well itself, so I figured we’d have to rescue him. I called Alex downstairs (he was the only kid home at the time) and he immediately insisted that we catch the bugger. We opened the window, popped the screen, and I grabbed the mouse as he scurried around the rocks outside.

As I was about to drop him into the handy CD-R spindle container, he made a mighty leap and jumped down to the floor. And let me tell you, that little sucker was fast. He ran for cover underneath the printer, and we prodded him with a hiking pole (yes, I have lots of interesting things in my office) until he ran across the carpet for the door. Luckily Laralee slammed the door in time, or he would’ve had free reign of the house. After a few minutes of chasing him and cornering him with ingenious combinations of foam board and camping equipment, we managed to get him into the spindle case. 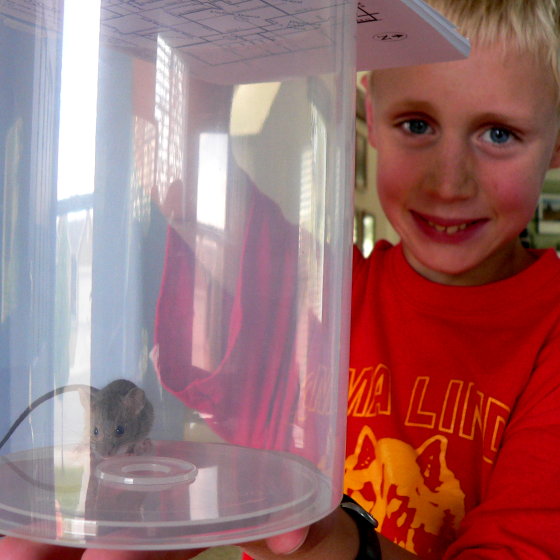 Then it was amazing to see him jump. Had we not put the little phone directory atop the container, he would’ve leaped right out of there. He kept hopping up and down, slapping the book at the top, until I guess he finally figured it that wasn’t going to work. Then, with nothing else to do, he pooped in the container.

Alex trotted him around the neighborhood, showing Kyra and Zack (who were at different friends’ houses), and eventually released him back into The Wild down by the creek.

We thought briefly about how fun it would’ve been to put the mouse in the cage with Pumpkin (Kyra’s gerbil) but considering his teeny size, I suspect Pumpkin would’ve just eaten him. Or maybe just accidentally sat on him, who knows.