So this morning my old friend Aron wrote to me and a couple other people:

My friend Greg Helding is running for mayor here in Racine. He is the only Republican in the race– although party affiliation means very little locally.

Anyway, one of our local news sites is doing a straw poll and the votes can come from anywhere. Please click on this link and vote for Greg Helding.

This smelled a lot like ballot-stuffing to me, but I’m always one to play political games. So I went to the web site: 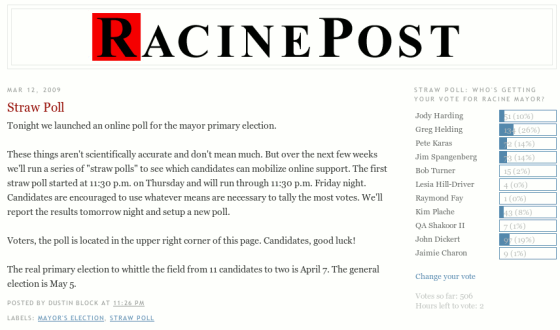 It looks like Greg is holding onto a tight lead in the straw poll, probably because I voted for him several times. I was going to look into hacking the system and placing ten thousand votes for Greg via a web script, but the poll is running on Blogspot, which is owned by Google and locked down pretty well. In a few minutes of poking I wasn’t able to find a quick way to game the system.

Still, I couldn’t resist adding a few comments to the blog. Most of the comments already in there were really boring things like

I take great comfort in knowing that Racine can count on as fine a person as Jim Spangenberg. His selfless contributions throughout the years serve as a model of the “Good Citizen”. 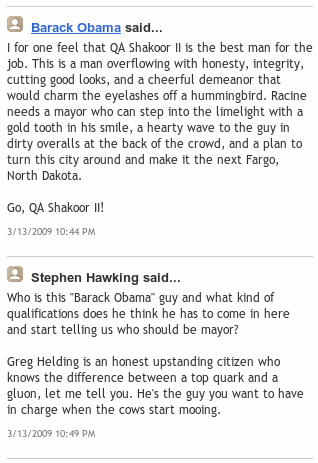