For the past three years I’ve been scanning every piece of paper that seems important enough to keep: utility bills, bank statements, credit card statements, contracts, checks from clients, and so forth. It sure keeps the clutter level down around the house, and makes it really easy to find old records (no more paging through huge ring binders or boxes).

But it’s been kind of a drag because I have a flatbed scanner and that means I have to slip in each page, hit ‘scan’, wait about 30 seconds while it does its thing, and then save the file. Slip in the next page and repeat. Let me tell you, that’s not really a fun way to spend an afternoon. So I’ve got binder after binder of old statements and bills and whatever, and they just stay on the bookshelves in Laralee’s office because I don’t really feel like messing with them.

Anyway, I saw someone mention the Fujitsu ScanSnap S510 sheet-fed scanner, and I immediately perked up. This little puppy has a feed tray where you can slip in a stack of paper and it cranks through them, creating image files (or PDF’s) as it goes. 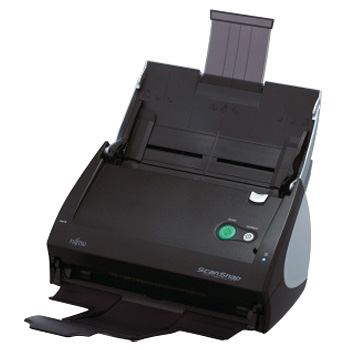 I read a lot of reviews and people said it was the greatest thing for office automation ever. After some hesitation (it’s not cheap) I decided to buy one. It showed up yesterday, so I was playing around with it a bit this afternoon. I can only think of one word for it.

This thing is awesome. Not only can it crunch through a stack of paper, each individual scan takes about three seconds (admittedly at a fairly low resolution, but since these are ten-year-old bills I don’t really care that much). Put in the stack, set the initial filename, and click ‘scan’. Less than a minute later you’ve got a series of sequentially-numbered files and you’re ready to feed in the next stack. I literally went through two one-inch ring binders in about fifteen minutes. It can also duplex, create PDF’s on the fly, and use OCR to index those PDF’s so they’re searchable.

It’s still going to take some time to digitize all of my old paper records, but I suspect I could finish the job in a single day instead of a month.

The next mission for this thing will be to process all of my old photo albums. I’ve got a few thousand pictures I’d really like digital, but again didn’t relish the thought of scanning them one at a time. Now I can drop in a stack, set the resolution nice and high, and watch them churn.