A guy named Stephen von Worley was driving down the interstate and saw a McDonald’s on the horizon. He was struck by the thought: what place in the United States is farthest from a McDonald’s? It seems like when you go on a cross-country trip– which we do pretty often, whether it’s to family in Idaho and Missouri or vacations in the southwest– the golden arches are beckoning at every other exit along the highway.

Armed with a list of all 13,000 McDonald’s restaurants in the country, he plotted a map. 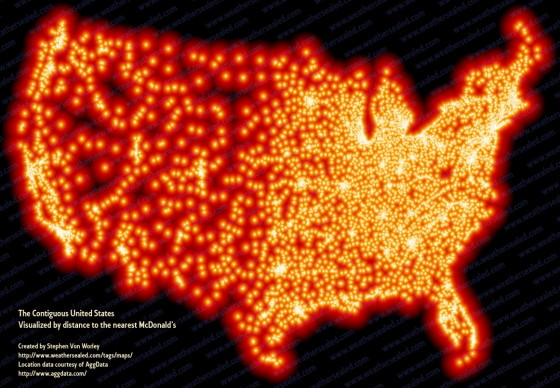 Of course the East is pretty much wall-to-wall McDonald’s, but it’s interesting to look out West and see the “hot spots” which are major cities (Salt Lake City, Phoenix, Denver, Kansas City, St. Louis, Minneapolis). You can even trace some of the major interstates in the wastelands of Utah, Nevada, and Oregon.

And the answer? The farthest you can ever be from a McDonald’s within the lower 48 states is somewhere in South Dakota, 145 miles (by road) from the nearest McNuggets.