I’m officially an internet celebrity. My friend Jeff posted an entry for me on Wikipedia under Shoeless Jeff:

Shoeless Jeff is a legend in his own mind, and a towering figure in Boulder Ultimate.

While other Ultimate players worry about which cleats to wear, how many pairs of socks to bring to a tournament, and the best way to deal with blisters, Jeff blithely ignores all that. While other players are ‘cleating up’, Jeff is curling his toes into the lush summer grass, and dreaming of patchoulli, hippie chicks, and jambands.

Despite these handicaps, Jeff somehow still manages to hold his own with some of the slowest, most egregious swill-throwers in the league, and hardly ever slips and busts his ass.

Rumor has it that as he gets older, he’s discovering the benefits of playing in shoes, leading one to wonder if the “shoelss Jeff” moniker will stick, or will he have to be called “Shoed Jeff”, “The Jeff previously known as Shoeless”, or just plain old “Old Fart”.

Due to Wikipedia’s moderation guidelines, I don’t know how long it’ll stay up before someone in charge yanks it, but for a brief moment I enjoyed my fame and had a good laugh. 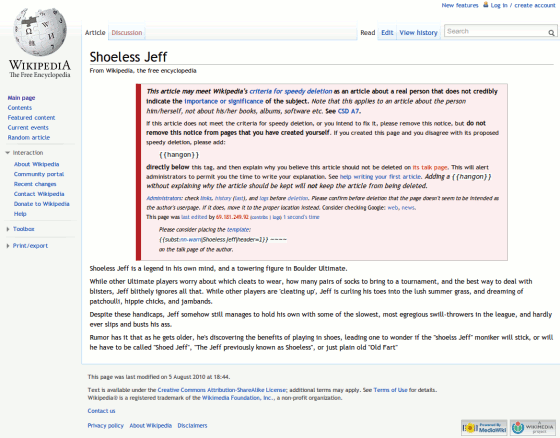