I bought some sandals today.

For the past decade or more, I’ve been repeatedly buying Mossimo sandals from Target; they cost around $20 and last maybe two years or so. I wear sandals all year, including in the winter– my rule is if there’s actual snow on the ground, I’ll put on boots or at least close-toed shoes, but other than that it’s sandals. Every time a pair wears out, I’ve bought another. Well, Mossimo stopped making the particular sandal I really like, so now that my sandals have worn out, I don’t have a way to replace them. I’ve been wearing my current pair for several years now, and they’re completely shot. Both soles are cracked and falling off, the upper surface is worn through, the straps’ velcro isn’t sticky… in short, they’ve served their useful life and then some.

So I thought maybe it’s time to get a quality pair of sandals– meaning more than $20 a pair. I was at REI in Denver yesterday and saw a really nice pair by Ecco. They looked pretty much like my old ones but were much more comfortable and (in theory, anyway) should last longer because they’ll have higher-quality materials and manufacturing. 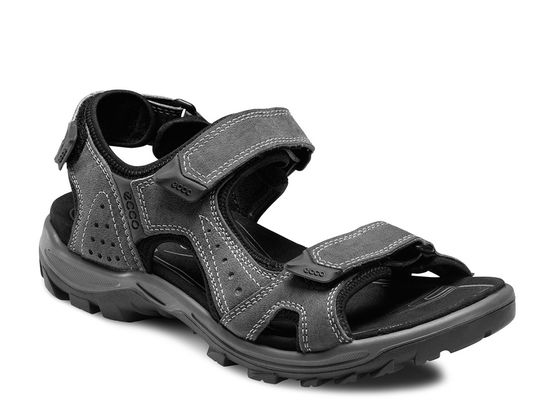 The problem? These are $130. Wow, that’s the equivalent of maybe a decade of buying cheap sandals! The economics of this situation are tough. Then again, many years ago I used to buy $10 sunglasses time after time, usually breaking or losing them and then buying another cheap pair; at some point I dropped $80 on a pair (shocking!) and I still wear that pair. I’m guessing these sunglasses are 15 years old by now. In short, sometimes it might be worth the big investment rather than the series of cheapies.

So I dropped the $130 and bought a pair online. Now I eagerly await my sweet new footwear. We’ll see if this turns out well.