Background: on Tuesday I played ultimate on a slushy snow-covered field in 30-degree weather, and I was panting and wheezing. After the games– in which my team was trounced twice– I felt completely spent. Normally winter is kind of a slow time for me in terms of exercise, so I get a little flabby and out of shape. By mid-summer I rebound a bit because I’m back to ultimate four days a week, biking, and the occasional hike. Still, on Tuesday I felt like I was probably in the worst shape of my adult life. It was awful.

I vowed that it was time to get in shape. Seriously.

So yesterday I dusted off my bike and headed to work, even though it was about 25 degrees in the morning. I could tell it’s been a while since I was on the bike, because even my short 2.5-mile commute was kind of painstaking. It was a start, but I need to be better about exercising more regularly. Being out of shape sucks.

Today was a beautiful sunny 60-degree day. So yesterday, in anticipation of the unseasonably warm weather, I wrote to our pickup ultimate group:

Just in case you haven’t been paying attention to the weather forecast, tomorrow is supposed to be sunny and 60 degrees. Yowza! Let’s play.

I’m writing today so all of the slackers who don’t like “winter ultimate” can dig their cleats out of the back of the closet and bring them to work tomorrow. You won’t want to miss it.

To which Tall Paul responded with:

I’m in. First time playing since a torn meniscus at the spring league tournament, so I’d like to request all time guarding Jeff.

Michael followed up with:

I have you beat: torn meniscus, ACL replacement, and shoulder labral tear– thus, dibs on Jeff.

I have a pair of torn meniscus (both knees), two teenage daughters, and a 9-week-old baby… I get to cover Jeff.

I’m not going to even be there, but I think I’ll still be able to stop Jeff from scoring so I claim mental dibs.

You can just feel the love from the guys.

Indeed, today was a gorgeous day and we had a pair of really close games. I still have an uphill battle to be “in shape” again, but I did manage to score the winning point in the first game (7-6). In the second game I did a down-the-line sprint to the endzone to block the other team’s game-ending point (although we still lost 2-3). Take that, hecklers! 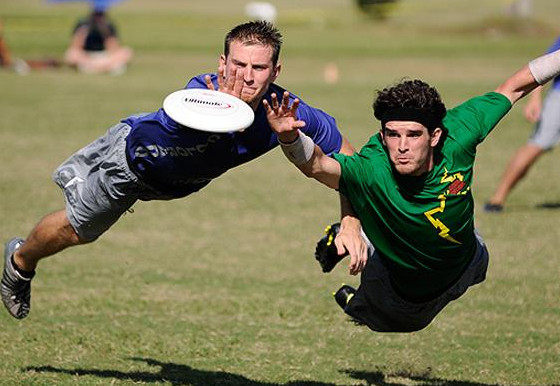