In 1989 my high school sponsored a math contest. It was called “Three Threes” and the rules were quite simple: write down mathematic expressions using three– and only three– number 3’s to derive all whole numbers from 1 to 100. Any math operators could be used in any combination, but no other numbers were allowed. For example, the number 6 could be represented with three 3’s as

It seems simple at first blush, and in fact the first few numbers end up being a breeze. But what about 47? Or 82? It gets tricky very quickly.

Being the math nerds we were, Bech and I both entered the contest. I don’t know if anyone else in the entire school entered, but it didn’t really matter. We were only interested in beating each other. We had several weeks to come up with our solutions, and I remember sitting in various classes puzzling through different combinations to come up with representations for stuff like 55 and 94 and whatever. It was hard. But both of us were very competitive and very determined.

In the end, I was crowned the victor. Bech actually would have beat me, but on his final answer sheet he’d mis-copied one of his answers and I ended up winning by one. I don’t remember the final tally exactly, but I think I was able to solve around 85 of the 100 numbers. He had 84.

I won a $50 U.S. government savings bond, which I think is still tucked away somewhere in the basement. Hey, that was big money in 1989!

Anyway, a few weeks ago I challenged Bech to a rematch. Once again, we’d write down as many expressions with three 3’s as we could, and on March 30 we’ll compare answers to see who’s the biggest math nerd. I’ve been working sort of on and off on this, but time is marching on and I need to get cracking. My pride is at stake here… 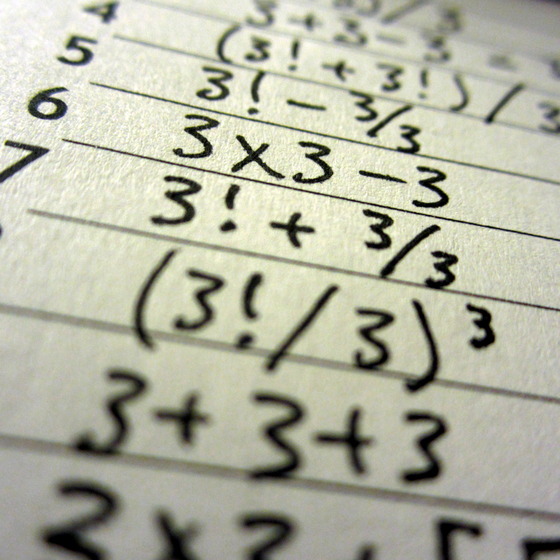