I taught Alex how to play the old board game Risk the other night. Our first game was interesting, as he didn’t really understand the strategy and I had to conveniently “forget” to guard one of my borders adequately. He rolled into South America and proceeded to wipe out a couple of continents. In the end, after a hot contest, he won.

Last night he wanted to play again, so we set up the board and went to work. He insisted on conquering all of Asia, despite my advice that doing so is difficult and often a waste of resources. Well, he managed to do it– and hold it– much to my chagrin. The dice were simply not on my side, and despite the fact that I held North America, he continued to gain strength in Asia, Australia, and Africa.

In the end, he cashed in some bonus armies and placed his juggernaut army on Kamchatka. A vicious battle across the Bering Strait ensued, and when he finally conquered Alaska it was only a matter of time before he crushed the rest of North America. When the bloody turn was over, I was left with four countries scattered in Europe, and he held the rest of the world. 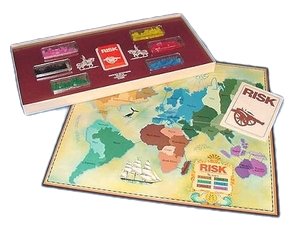