I was heading home from rebuilding some servers down in Denver, and it was late, dark, and rainy. I turned onto 6th Avenue to get to I-25 and head north, and was surprised to see four empty lanes separated by dashed lines. Odd, I thought, that there wasn’t a solid line dividing the two halves of the road.

As I continued to drive, there were some green lights ahead of me. There was also oncoming traffic.

Four lanes of it.

Yes, that’s right– I was going the wrong way on a four-lane street, heading straight for four oncoming cars. I took a sharp right onto some side street, so everything was okay, and eventually I found my way to I-25 and got back home. Upon further reflection it still baffles me why there were green traffic lights facing me. Why would that be? To confuse drunk drivers on Saturday nights or something? 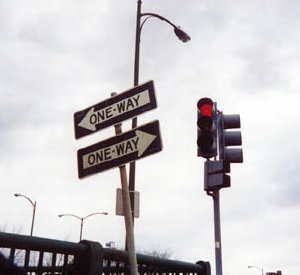