The sheer stupidity value of the story below is so high that I can’t even think of a good joke to go with it.

From the Florida Sun-Sentinel:

“An American Airlines flight returned to Fort Lauderdale-Hollywood International Airport shortly after taking off Monday because a threatening note was found on board, federal authorities said. Flight 605 departed from the airport for San Juan at 6:53 p.m. It turned back when a passenger discovered a napkin with a bomb threat written on it, FBI Spokeswoman Judy Orihuela said.

A passenger found the note when they flipped down their tray table, Orihuela said. The note said “bomb” repeatedly and had “meet the parents” written in parentheses.”

You’ve got to hand it to the TSA: they’re always looking for new and innovative ways to keep America’s skies safer. Sheesh. 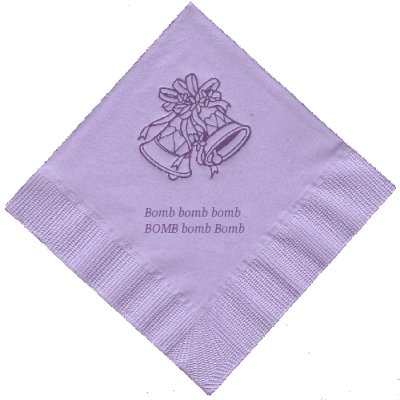