Keep in mind that Zack is four years old. And yes, he actually drove Laralee’s car.

According to her story (corroborated by witnesses), Laralee had pulled up to a friend’s house where Zack was playing. She left the car running and went to the door to get Zack. He climbed into the car while she chatted with her friend. Finally, she said something like, “Well, I should get going before Zack decides to drive off without me.”

At that moment– you couldn’t have planned this any better– Zack slipped into the front seat, put the car in “drive”, and started down the street. Laralee tore after him, catching the car and frantically grabbing the door handle to get in.

Zack had locked the doors.

So here’s Laralee, running alongside the car, screaming at Zack to unlock the doors. He’s steering the car (mostly) and just smiling like a devil. The car is on course to smash the fence of a neighboring house. Laralee is frantic.

Zack finally concedes and unlocks the door; Laralee jumps into the front seat and orders him to the back. Just as the car is about to hit the fence, she slams on the brakes. Zack, in the midst of climbing into the back seat, is thrown forward and knocks himself right on the dashboard. There is much wailing, compounded by the stern lecture about don’t you ever do that again and so forth.

Parenting is such a hoot. 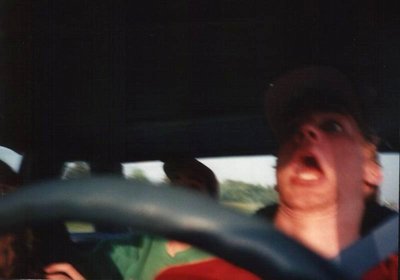