Last night I mowed the lawn. I think it’s the third time I’ve mowed since 1990– I didn’t do it in college, I didn’t do it in my apartment, and after getting married Laralee insisted on doing it herself because she (go figure) says she enjoys it. I’m not one to argue about mowing, so I’ve always let her have her fun. But she’s out of town this week with the kids, and the grass is growing, so I didn’t have much choice.

While working on the back yard, I was struck by the contrast between our yard and our neighbor’s yard. 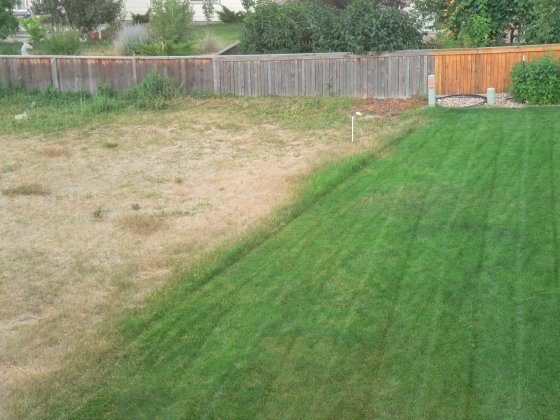 Let’s call him “Bill”, mostly because that’s his name. Bill doesn’t seem to care about his lawn, and after leaving it as bare dirt for about two years, the homeowners’ association finally levied enough threats and fines that he dropped in some sod. But I think he only waters it once a year, so the grass is pretty much a crunchy burnt color. The weeds seem to do well, however, as you can see by the three-foot monsters along the back fence. The kids actually enjoy heading over to Bill’s lawn (after donning shoes, of course) and hacking at the weeds. Some of them are almost as big as Zack.

Unfortunately it seems that nothing can really be done about Bill’s yard. The HOA doesn’t care if it’s not visible from the street, and the city doesn’t have an ordinance covering back yards. So we sigh and do our best to control the weeds that creep over from his lawn into ours, and assure ourselves that the barren wasteland makes our yard look fabulous by comparison.