Fourteen years ago I bought a used Pioneer receiver/cassette deck and a twelve-disc CD changer. I still remember the salesperson asking me if I wanted to extend my warranty, because the standard one-year deal probably wouldn’t be enough. Of course I refused (does anyone actually buy the extended warranties?) even though he gave me a bunch of reasons why I was being an idiot, such as “With a used unit like this, you’ll need to clean the CD player laser lens at least every six months, and the warranty will cover it.”

Fourteen years have passed with nary a problem. I’ve never cleaned the laser lens, and when I totaled the car the CD deck was actually torn from its mounting brackets in the trunk and thrown around a bit, but when I bought another car I had it installed again and it worked just fine. The only problem is it skips when I careen across a railroad track at fifty miles an hour, but I think that’s probably reasonable.

Kudos to Pioneer for making a CD player that could, apparently, weather Armageddon without much problem. 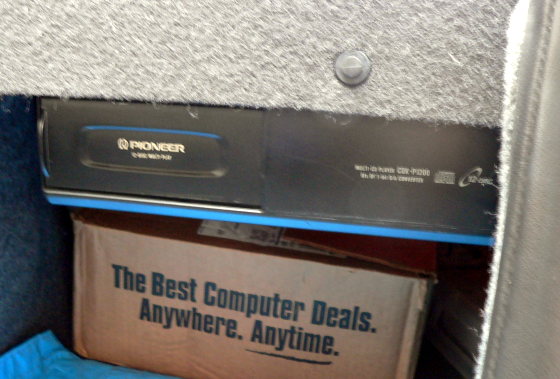 Still, stocking twelve CD’s in my trunk has grown tiresome, and I thought it might be time to join the Digital Age (which may be renamed to The iPod Age, from what I hear). I have my iPod Shuffle— which I love– and I figured I should hack my car stereo so I could play tunes from it.

Unfortunately when they built my stereo (1994) the iPod wasn’t even a hazy dream in Steve Jobs’ head, so there’s no nifty jack or plug or whatever. Taking a page from Thom’s playbook, I dug up my old cassette tape adapter. It was buried in the back of the closet in a box of old electronics; I suspect the last time it was actually used was when I had my trust Sony Discman in the Nissan (circa 1994). But hey presto, it still works! Kudos to Sony.

With a bit of creative disassembly of my dash, I was able to set up a place where I can mount my iPod above the deck (ahh, the magic of Velcro!) and run a wire to the tape. 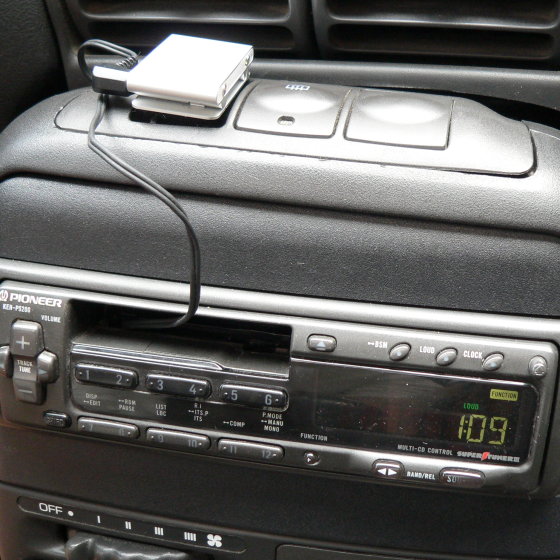 The funny thing is there are three “buttons” on the top of my dash, but only one of them actually does anything (rear window defrost). One of them is for fog lamps– which I don’t have– and the other is for… well, I don’t actually know. Probably rocket boosters or an ejection seat. So it didn’t hurt anything to yank one of the buttons and replace it with the Shuffle, which just happens to be exactly the same size.

Ahh, now I can load up the iPod and jam in the car. Isn’t technology great?