La, Kyra, Zack, and I played a rousing game of Monopoly this evening. I don’t think Laralee has played the game more than maybe three times in her life, so she was kind of confused about what to do (general strategy: buy everything you can for the first ten or so turns). Once we started building houses she was in uncharted territory and had to leave anyway to pick up Alex at church, so I took over her position. She did pretty well for a while, but stumbled into my big hotel chain and fell fast.

Kyra managed to grab all four railroads and both utilities, which is a devastating combination. She racked up $200 every time someone landed on the railroads (which is surprisingly often) but in the end I pulled ahead by planting motels on my favorite properties of all: the orange ones. 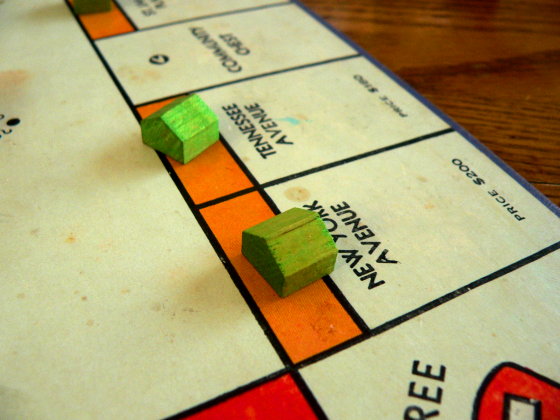 I remember back in the late 1980’s I wrote a computer program that calculated the odds of landing on particular properties (I think many computer science and math geeks do this sort of thing. My model even incorporated three doubles (go to Jail) and the Chance and Community Chest cards that send you places like Boardwalk and Go and Illinois Avenue. In the end, it was clear that the most popular places to land are the orange properties. Other models I’ve seen support this conclusion, so it’s always my strategy to snatch those. Zack was a holdout this game and refused to sell me New York Avenue which was the only orange I was missing. So I had to start with the light blues, and at one point when he landed on a hotel and owed me $550 I offered to take New York instead. That was the beginning of the end– I quickly built up houses and then hotels on the orange, and after pounding Kyra a few times (she had a lot of cash reserves) managed to get the reds right around the corner. With hotels there after a few turns, it was all over.

Monopoly is interesting because it’s a zero-sum game: in order for someone to win, someone else must lose. It’s frustrating to a lot of people (Laralee for one, my mom for another) but I enjoy it. The kids are actually pretty good at it– Kyra lasted a long time, and Zack didn’t do too badly either.