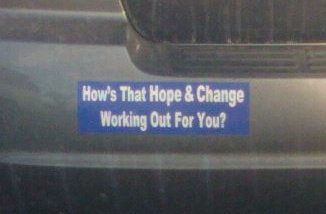 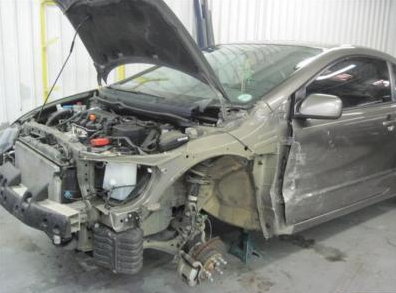 I figure all of the Christmas cards have finally arrived, so it’s time for me to take a picture of our Wall O’ Cards. It’s fun having so many people send us their annual updates and photos. 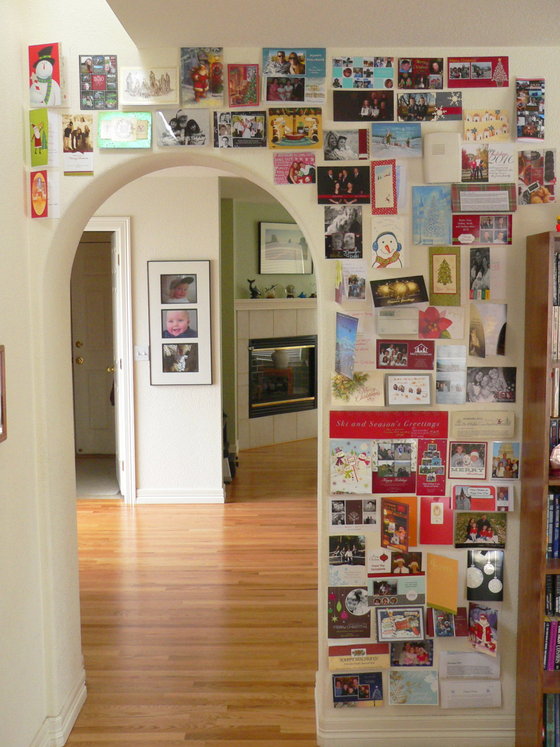 Two people are playing a game. The first says “January 1”. The second must say another day later in the year by changing either the month or the day, but not both. The goal is to say “December 31” to win. Given these rules and the first player’s choice of January 1, what should the second player do?

When I read the puzzle, Laralee rolled her eyes and grumbled about how she doesn’t like these sorts of things. But I started thinking about it (talking aloud as I did so) and before long she had a pencil and paper and was writing down my strategy. Spoiler alert ahead.

Since the winning move is December 31, we know that anyone who picks a day in December that’s not the 31st will lose. The next player will simply change the day (remember, only the day or month can be changed– not both) and score the win. That means all days in December except the 31st are losing moves.

Let’s step back a month. If I choose November 30, the other player can’t pick anything in November (since there are no days after the 30th) and must choose to change the month. That gives December 30, and my choice is then December 31. Thus November 30 is a winning move. It’s important to note that all other days in November are losing moves, because the other player simply chooses the 30th for the win.

Going back another month, consider October 31. That’s a losing move because the other player goes straight to December 31 for the win. Now consider October 30. Again, that’s a loser because the next move is November 30 which we’ve shown is a winner. How about October 29? If I choose that, you have four moves: you can then choose the 30th or 31st– both of which are losers. You could also choose November 29, again a loser. Finally, you could pick December 29, a loser. So we see that October 29 is a winning move. Any day in October after that is a loser, and anything before it means I choose the 29th for the win. So again, we’re left with a single day in October that’s a winner.

You can see the pattern. We step backward through the calendar, subtracting one each time, to find the winning days for each month. It’s important to note that every other day in the month is a loser, meaning these 12 days are the only winning days (assuming perfect play). Our list of winning moves looks like this:

The funny thing is when we were finished, Laralee (grudgingly) admitted that solving the puzzle was, in fact, kind of cool.

I came home from work this evening and Kyra immediately attacked me and said, “Can you help me with my math homework? There’s this one problem that I can’t figure out, and mom’s no help.” Of course she’s been on vacation for two and a half weeks and hasn’t done this homework, and the night before she goes back to school suddenly it pops into her head. But that’s neither here nor there.

Anyway, I sat down with her to see what I could do. The problem was to write a function that would tell you the number of dots in a square or a triangle as you added dots to the bottom. In other words, two horizontal dots makes a square of four dots, three makes nine, and so forth. Obviously the function for that is y=x^2, easy cheesy. But the triangle one was a bit harder: two horizontal dots is a triangle of three, three is six, four is ten, etc. Each time, for a row of x, you add the number x to whatever your last number was. It’s easy to see the pattern but I couldn’t figure out the function for it.

I told her the answer was y=sigma(1->x) x which is technically correct… but I suspect summation notation is beyond seventh-grade math. I scribbled a few equations but didn’t have an answer. Dang.

Enter a YouTube video about the 12 Days of Christmas, which Mel sent to me today. It explains about halfway through how to sum the so-called “triangular numbers”. After some scribbles in her notebook, the narrator Vi demonstrates that the equation is (x^2+x)/2. And she does it in a way that’s simple but elegant. Nice!

So I thought that was pretty cool. I watched a few other videos from Vi’s collection and they’re fun. I think I like them because that’s exactly the way I was as a kid… I would play with numbers and graphs and my calculator and find all kinds of fascinating patterns and rules. I found stuff like the base of the natural logarithms and the relationship between odd numbers and primes and even the spatial dimension where the volume of a hypersphere is maximized in relation to its surface area. I’m not even kidding.

The U.S. federal debt grows by $4 billion per day.

That’s a lot of interest.

On the second-to-last day of the year, we’re getting our first real snowfall of the season. Up until now it’s been unusually warm and terribly dry. I remember moving to Colorado in 1995 and seeing six inches of snow on the last day of summer. Although that’s unusual, we’ve certainly come to expect a bit of the white stuff in October and later.

The mountains have been getting tons of snow– which is good for the ski areas and the water table in spring thaw– but the plains have been bone-dry. Apparently the average snowfall for Denver by this time of year is 25 inches. We’ve collected just over 1 inch to date, and that was in several sporadic snowfalls that only dusted the ground.

Hopefully today’s snow breaks the spell and we can look forward to a nice white winter now.

I just received a statement from my business insurance company. It starts with this gem:

To help your insurance keep pace with increasing costs, we have increased the amount of insurance… giving you better protection in case of either a partial or total loss to your property.

Looking over the policy, there have been absolutely no changes to the “amount of insurance”, which I assume means the coverage I have and the money I can recoup in the event of a catastrophe. So what they must have meant– silly me!– was they were only increasing the cost of my policy.

Nice. It’s hard to know which to dislike more: banks or insurance companies.

A small group of scientists has reported that they’ve successfully tested a substance (Tl4PbBa2MgCu8O13+) which is superconductive at zero degrees celsius. Since most superconductors only work when they’re cooled to hundreds of degrees below zero, this is a game-changer. Once we can create superconductors that work at room temperature, it’s a world-changer.

The awesome march of science and technology continues.