I’ve said it here before, but I’ll say it again. AmaroK is awesome.

While the rest of the world apparently uses iTunes to manage their thousands of MP3 songs, I find the iTunes interface to be absolute garbage. (Thom agrees, but since he’s using a Mac he doesn’t have a lot of options.) When I mention some feature that AmaroK has, iTunes people wish they could do the same. Go figure.

Over the past few months I’ve gradually been rating all the songs in my collection. It’s a slow process, because I only do it occasionally. But over time I’m building up a good list of what I like. So today as I’m slamming out some code I decided to make a custom playlist of only the very best– the five-star stuff. 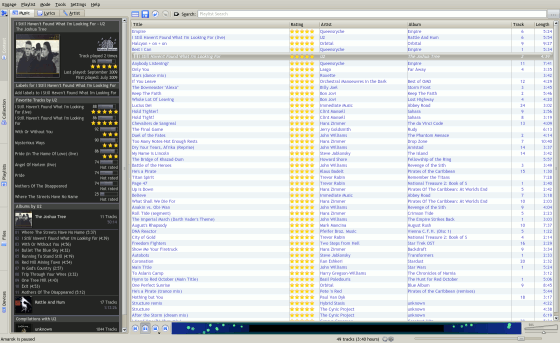 Nice! Now it’s nothing but the good stuff as I write PHP.